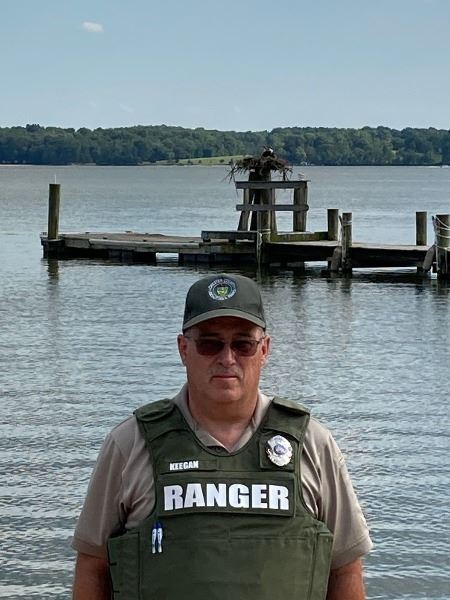 Frank Keegan finds Chester County Parks to be the best place to share his love of meeting different people in a friendly setting.  His career path supports many years of public service including that of Pennsylvania State Park Officer, Pennsylvania DCNR Chief Ranger, West Whiteland Township Police Officer, and Pennsylvania State Parole Agent.  Of all of these opportunities Frank enjoyed being a ranger the most, so when the opportunity to become a Chester County Park Ranger came along he happily accepted the position.

For those considering a career as a park ranger Frank offers his best advice, “Figure out what type of ranger you would like to be:  interpreter, search and rescue, fire, law enforcement, or back county…..then obtain the education that is needed to complete your dream.”  Frank’s advice mirrors his own accomplishments and career path.  He served as Associated Staff for the Transportation Safety Institute in Oklahoma City, OK, and also for the US Department of Transportation, Office of Motor Carrier Safety.           He had the honor of being on loan to the 1996 Atlanta Centennial Olympic Games as a member of an International security team where he served as supervisor.  Additionally, he was on loan as a Police Officer to the 2002 Utah Winter Olympic Games.   More recently he served as a Pennsylvania State Forest Fire Warden.

Ranger Keegan believes the best piece of advice he’s ever received would be to “never stop learning…..”  This is advice he certainly followed.  He has an AS from Pennsylvania State University in Community Services and a BS from West Chester University in Criminal Justice.  He completed Master Courses in Organizational Leadership from Immaculata University.

Frank defines success as “Being able to get up in the morning, look at myself in the mirror, and know I am going to do my best.”  He follows through by serving the community as trustee on the District 17 Forest Fire Wardens Association, Chester County Council BSA District Committee, Council camping Committee, and HSR Camp Ranger.  He is a lifetime member of the Malvern Fire Company where he served as Vice President in 1981, and Line Officer (Lieutenant 1980 and 1981).  While serving as Chief DCNR Ranger in the Promised Land State Park area he appeared in an episode of Lost! What do you do!?   You will often find Ranger Keegan on the trails of Chester County where he enjoys the opportunity to meet different people and live by his personal motto, “Be safe.”