In the 18th and 19th centuries, Warwick’s woodlands provided much of the raw timber used to make charcoal for the region’s iron furnaces and forges. Remains of the iron industry can still be seen at various charcoal hearths along old cart paths and the Charcoal Trail.

Rebecca Grace (1718-1800) was an iron making pioneer, patriot and Methodist. Born Rebecca Savage, Rebecca was the granddaughter of Thomas Rutter, a friend of William Penn and Pennsylvania’s 1st iron master. At age 16, Rebecca married Samuel Nutt Jr. After Samuel died in 1739, Rebecca was left with an infant daughter and a sizable estate, which included Coventry Forge, the 1st iron forge in Chester County; Warwick Furnace, located a few miles to the west; and the vast woodlands in the area that were used to make charcoal to power the these iron making facilities. 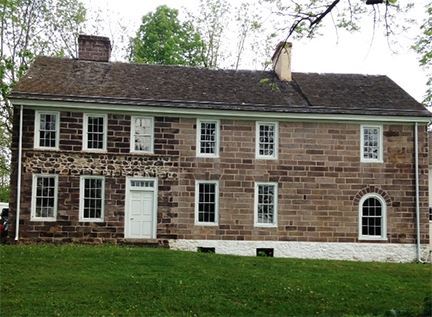 In 1741, Rebecca married again to Robert Grace. An upstanding citizen, he was a good friend of Ben Franklin and a founding member of the Library Company of Philadelphia. Robert Grace became the general manager of both Coventry Forge and Warwick Furnace. During this period, Ben Franklin would visit his friend regularly and gave him the plans for his “Pennsylvania Fireplace”, the 1st enclosed stove. Tradition has it that the stove was tested in the southwest parlor of the Grace home, the Coventry House. This same room was known to have been used to hold services of the Methodist tradition.

Iron Heritage Loop Trail During the revolution, Warwick Furnace made munitions for the continental Army, while General George Washington led his troops to the Warwick area after the battle of Brandywine to protect the local forges and furnaces before the encampment at Valley Forge. After Robert’s death in 1766, and the death of Franklin’s wife Deborah in 1774, Franklin proposed marriage to Rebecca, but Rebecca’s Methodist inclinations predominated and Franklin was rejected for being “too worldly”.

Their friendship continued, and when Franklin realized he was close to death, he asked to see Rebecca one last time. In March of 1790, at age 82, Rebecca made the trip from Coventryville to Philadelphia to be one of the last people to see Mr. Franklin alive.

On December 3, 1800, Lady Grace passed, having left a legacy that continues today.

Coventry Forge, located within Warwick County Park, was established in 1717, the 2nd in the state. Thanks to Rebecca's grandfather, beginning in 2016, we will be celebrating 300 years of Iron Making in Pennsylvania. Today, part of this woodland, and the charcoal hearths dating back to that period, can be seen along the hiking trails in Warwick County Park.

The legacy of these early industrial pioneers is traced in Warwick’s Iron Heritage Loop Trail entitled “A Road to the Furnace.” A system of interpretive panels provides a self-guided walk through a portion of the woodlands, while helping the visitor imagine what these woods once looked like when the production of charcoal helped to fuel the birth of our nation. Just across Route 23 in Coventryville, you can visit the village that grew up around the Coventry Forge, and see the Coventry House, the Grace residence.