Have you ever noticed a “stick” floating among the lily pads on a pond only to see it suddenly move? Last July, veterans from the Coatesville Veterans Affairs witnessed this predator/ prey relationship at Hibernia Park’s fishing pond. The vets, casting bait near the lily pad area, did not scare the “stick”. In fact, it fearlessly waited until the casting spooked a small frog. Then the “stick”, or water snake, came alive and transformed into an aggressive predator. It was an observation the vets will remember always!

The northern water snake (Nerodia sipedon sipedon) deserves its aggressive reputation. They have been reported to approach anglers on land or in boats. Water snakes will defend their resting areas, and while hunting food, they do not shy away from people. It is best to keep your distance and retreat if approached. 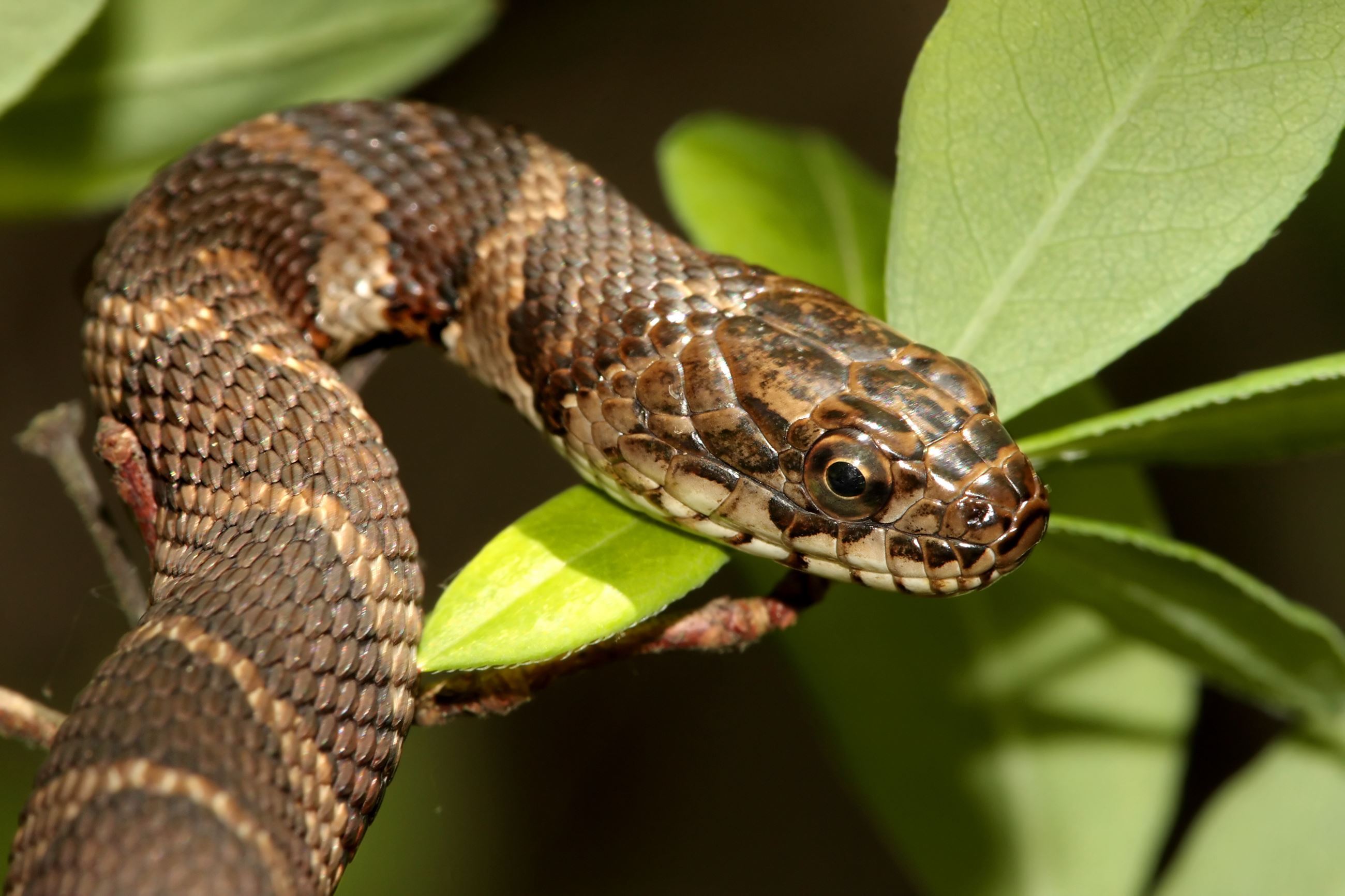 It is not a good idea to handle water snakes. They have powerful jaws that can inflict a severe bite. If handled or cornered, it will strike repeatedly at it's enemy. To make matters worse, water snake bites bleed profusely due to an anticoagulant quality of the snake’s saliva.

The northern water snake plays an important role in keeping nature in balance. A fun predator to watch from a distance, it’s fascinating to see them forage for food, bask in the sun, swim under and across the water, or crawl around roots in its riparian habitat.

Snakes are reptiles. Reptile characteristics include an internal skeleton supported by vertebrae (backbone), with dry, scaly skin and, if they have feet, claws. Reptiles breathe with lungs but cannot regulate their body temperature, defining them as ectotherms. Reptiles reproduce by hard-shelled eggs or live young. Their Order, Squamata, is distinguished by an elongated body covered with scales and generally without limbs. Also, snakes have no external ear openings or movable eye lids.

This moderately large snake is usually found near water, and has a few key identification features. The head is distinct and well-defined from the neck region. The general body coloration is an alternating dark pattern of blotches on its back and sides, often called alternating saddles, and is widest at the mid-body. The tricky part is that the color varies from reddish-brown to gray to brownish-black. As the water snake ages, the bands and blotches tend to blend together, at times becoming almost completely black.

From April-October, watch for water snakes in all Chester County parks. During the day, they can be seen sun-basking on brush and rocks, or hunting among the plants at water’s edge. Their day menu includes frogs, worms, crayfish, salamanders, and bird eggs or small birds in nests. At night, using the cover of darkness, they hunt minnows and slow-moving sick or injured fish. Spring romance begins when warmer temperatures become steady and mating can take place. Northern water snakes give birth to live young between August and October, with an average litter of 25 babies, each measuring six to twelve inches long. The young are brighter and more vividly colored than their parents. Mothers do not take care for their young; the newborn snakes must fend for themselves. This is the most dangerous time of the life cycle. Water snake mortality is highest among juveniles, who are preyed upon and eaten by bass in ponds and other larger sport fish in the lakes. Even as an adult, water snakes still have plenty of predators including great blue herons, hawks, raccoons, foxes and snapping turtles. When threatened, they defend themselves vigorously by striking and biting repeatedly, along with releasing excrement and musk. Crossing roads during the breeding season and migrating from one water source to another in search of a mate, food or den can be dangerous. If they avoid predators and cars, water snakes may live over five years, but the average life span in the wild is unknown. When temperatures drop and frost arrives, water snakes search for a winter den. Den sites may be mammal burrows (a groundhog’s for example), pockets deep in root systems, rock crevices, and other sheltered habitat near their summer habitat. During really warm spells they may come out or move to other den locations.

Life by the water results in their common name. They seem to prefer still water, but will hunt or transport themselves in fast moving creeks. From the natural world, they enjoy using beaver lodges, muskrat houses and brush - both dead piles and living plants along water to bask in the sun. From the man-made world, they use waterside structures such as docks, bridge supports, rock dams, causeways or spill ways. If disturbed, water snakes quickly dive into the water and submerge for a few minutes before resurfacing to check on the danger. If still threatened, they will dive again and stay submerged for a long period of time.

In Chester County parks, water snakes have been observed in our vernal pools, small ponds and Chambers Lake, as well as in our springs, streams and creeks along Black Rock Sanctuary. You have a decent chance to spot a water snake foraging for food, basking in the sun, or swimming from one location to another if you walk the waterways in Chester County parks from May through September.

At Chester County Parks, we encourage you to observe snakes, but not to handle them. Protect the snakes by not handling, harassing, injuring or killing them. It is against park and state regulations to kill snakes unless it is venomous and in defense of life and limb. People often kill water snakes out of fear or ignorance, by confusing them with northern copperheads, or thinking they eat large number of game fish. Water snakes, and snakes in general, provide a valuable service of preying on sick or injured prey, and keep rodent and other populations in balance with the habitat.

If you are interested in protecting habitat for snakes over the long term, you could best direct your volunteer efforts toward riparian habitat projects and citizen involvement in local and regional land-use planning issues.