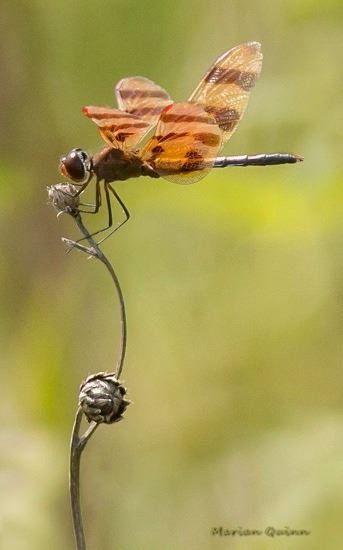 “If it’s not broke, don’t fix it.” This saying can apply to living organisms, as well as toasters! Most advanced organisms have gone through countless adaptations - changes to legs, arms, wings and mouths, enhancement or loss of sensory structures like eyes, nose or ears, reproductive strategies, changes in behavior. Over time these improvements ensure reproductive success and energy efficiency.

With that in mind, it is amazing to know that the Dragonfly has gone virtually unchanged - with the exception of size - for more than 350 million years! Let’s break down the dragonfly and discover how amazing these guys really are.

The dragonfly’s body shape has gone unchanged since the 1st fossils were discovered. A large head holds giant eyes, a large toothed mouth, and the visual brain. A large, robust thorax houses huge flight muscles; a flight master brain, and six legs lined with long spines that can hold prey items but cannot walk. They have a specialized respiratory system that directs oxygen to the muscles of the flight center. Finally, a long slender abdomen is used in reproduction and acts as a counterbalance. Needless to say, dragonflies are well-oiled, high-performance machines.

Dragonflies share the order Odonata, Latin for “toothed-jaw”, with damselflies. Their suborder Anisoptera, Latin for “uneven wings”, refers to the size difference of the forewing and hind wing. Damselflies’ wings are symmetrical and fold back over the body when at rest, while dragonflies hold their wings open. Damselflies are much weaker in flight, and generally fly a few feet above the water’s surface or surrounding vegetation.

All members of Odonata are hemimetabolous, which means the organisms go through incomplete metamorphosis (change). When the aquatic naiads (immature) hatch from their eggs, they strongly resemble the body structure of the adult. They are hunting masters in the water. Their extendable jaw-like appendage is capable of grabbing tadpoles and small fish faster than the blink of an eye. After the initial stages of development, and molting 9-17 times, the naiad emerges from the water to go through its final molt. The winged sexually- mature adult is typically the final stage. The developmental naiad stage generally lasts several years, much longer than the adult stage that lasts several weeks to a few months. However, it is the reproductive adult that we are most familiar with and regularly observe.

A dragonfly is silent in flight. It’s wings are one of a kind. They are attached to the thorax so the movement of the insect’s body causes the wings to flap. The buzz you hear when a fly or bee goes past your ear is not its wings flapping, but rather it’s thorax compressing and contracting. Dragonflies can move each of their four wings independently up and down and rotate them back and forth on an axis. This ability to fly straight up and down, backwards, stop and hover, and make hairpin turns at full speed and slow motion allows them to put on an aerial show like no other insect. Adjusting each wing allows for long periods of gliding and flying at speeds up to 60 mph! Most dragonflies have a pterostigma, or a dark, thicker cell towards the tip of each wing, which allows for 30% less wing movement during gliding. A subtle adaptation of one tiny cell over millions of years results in perfect flight. Simply amazing! Vision is a dragonfly’s primary sensory organ and it is extraordinary. A dragonfly’s head is almost completely engulfed by two giant eyes that consist of up to 30,000 ommatidia - a lens and the light sensitive cells behind it - that give the dragonfly nearly 360° vision. It uses about 80% of its brain to process all this visual information, and their remarkable vision helps them detect movement of other insects and avoid collisions in flight.

Let’s take these incredible physical attributes previously mentioned and throw some “brain power” in the mix. A dragonfly’s nervous system is incredibly developed compared to other insects. Many animals have a difficult time honing in on a food item when there are many grouped together. Some animals just “crash the party” with eyes closed and teeth blazing, hoping an unlucky flier-by gets snagged. Some even show frustration and move on to smaller groups of prey items. Not a dragonfly! A dragonfly is able to lock onto a target while still being aware of individuals in the swarm. It has selective attention while hunting in a swarm, and does not chase food. It has the ability to take present information and calculate a future location to intercept a prey item in mid-air. Using that 360° vision, a dragonfly almost always intercepts its target from below. The last pair of legs are exceptionally long and create a cage to hold prey, while a pair of large toothed jaws crush its food to mush - all while flying. Imagine having to worry that a predator knows where you’ll be before you get there, and you can’t see when it will strike and can’t hear it coming! No wonder a dragonfly scores 95% of the time! How is this possible if insects are seemingly simple creatures? The most talented great white shark is successful 50% of his hunting attempts, and the most impressive lady lion on her best day is only 25%. Dragonflies have been observed successfully hunting with only three wings! Would a three-legged lion or a shark missing a fin survive?

Menacing? Not to Humans

There’s a good reason why you see dragonflies around lakes and ponds - they’re aquatic! Females possess structures on the tip of the abdomen resembling a stinger. This is an egg laying tool called an ovipositer. They deposit their eggs on the water’s surface, or in some cases, insert them into aquatic plants or mosses. The males possess structures used for reproduction and mate-guarding. Competition for females is fierce; males will aggressively fend off other suitors. Sometimes males claim and defend a territory. If a competitor flies into his habitat, he will be chased off. Those that don’t defend specific territories may still behave aggressively towards those who cross their flight paths or approach their perches.

The way a dragonfly is built may seem like the pain they could inflict on a person would be excruciating. Ecologically, a dragonfly poses little threat to man as they are non-venomous. Any creature with a mouth is capable of biting, and although the mandibles of a dragonfly are equipped with some pretty gnarly teeth, they are incapable of breaking a person’s skin. The largest dragonfly would only cause a mild pinch. Dragonflies are beneficial in that they have a voracious appetite; one dragonfly can consume hundreds of agricultural pests daily. Certain species of dragonflies can also determine the health of riparian environments.

According to a US Geological Survey, Chester County is home to roughly 30 species of Odonates. Sussex County New Jersey has recorded 171 Odonate species - the highest in the country. Chances for observing exotic species in the summertime in southeastern PA are very good. When the weather gets warm, keep your eyes open for one of nature’s most impressive hunting machines cruising around bodies of water and fields. 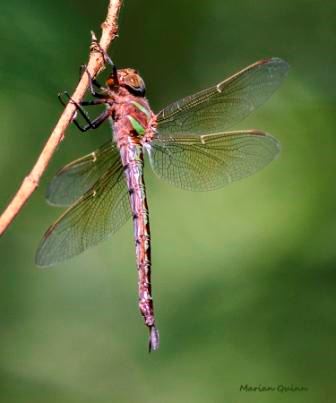