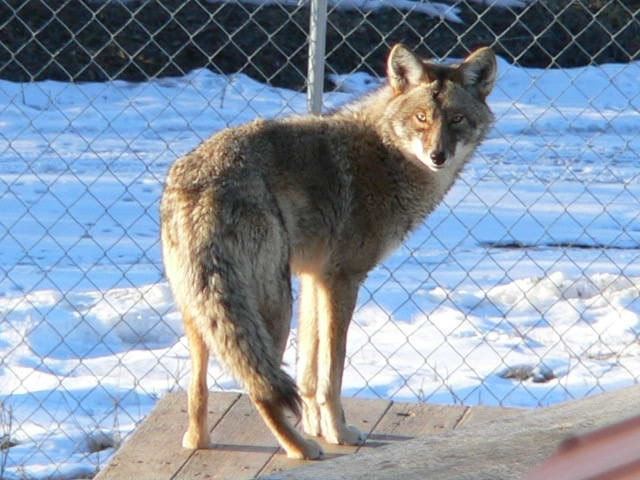 The largest wild canine found in Pennsylvania, the coyote is often portrayed as a sly trickster, appearing as a featured character in traditional stories from several Native American cultures. Coyote myths and legends depict characteristics such as clever, inventive and mischievous.

Actually, the coyote displays true smarts. He often scans the skies for vultures circling overhead or crows gathering - a sign that a dead animal lies below. When birds hover, the coyote knows to head in that direction for a free meal. The fast and fit coyote takes the food quickly and will run away with it, reaching speeds of nearly 40 mph.

No wonder the coyote has earned the reputation as a trickster, letting others find the food while he takes home the treat!

Coyotes belong to the order Carnivores, which is made up of mammals. Even though many eat insects, berries, nuts and other vegetation, they are primarily meat eaters. All carnivores have large canine teeth. Members of the dog family have long, narrow muzzles; erect, triangular ears; long, slender legs, and bushy tails. Their sense of smell is excellent, and they have keen sight and hearing. Unlike cats, they cannot retract their claws, which is good to know when looking for tracks.

Coyotes inhabit Pennsylvania, including Chester County and the Philadelphia metro area. In fact, coyotes may thrive in suburban settings and even urban areas. Coyotes simply adapt to humanized landscapes because they offer an abundant supply of food, water and shelter. These ready-made habitat components enable coyotes to expand their range, hopefully, coexisting with humans.

Coyotes in Chester County are usually spotted near heavy, brushy cover and edge habitat areas between woods and fields, or in agricultural areas where prey is abundant. They live anywhere from parks to industrial sites. Coyote sightings or signs have been reported in all of our County parks.

The coyote digs a den under rocks, in hollow trees, into the hillside, and often prefers expanding an existing groundhog burrow. Coyotes have monogamous partners, who live in a pack consisting of the mated pair and their pups. Sometimes, due to delayed dispersal, a pack may include offspring from previous years, but that’s not likely in Chester County. Mating season usually occurs in February, with litters being born in the den mid-April to early May. To compensate for a high mortality rate, a typical litter averages five to seven pups.

Around three weeks old, the young pups begin to emerge from the den. At five weeks, the pups are fully weaned but still cannot chew very well. The parents continue to feed them with the coyote’s version of baby food - regurgitated food eaten and partially-digested by mom. Within a few weeks, mom brings her pups along on hunts to practice their skills. Male pups leave the den between six and nine months, while females remain with their parents to form the basis of the family pack. 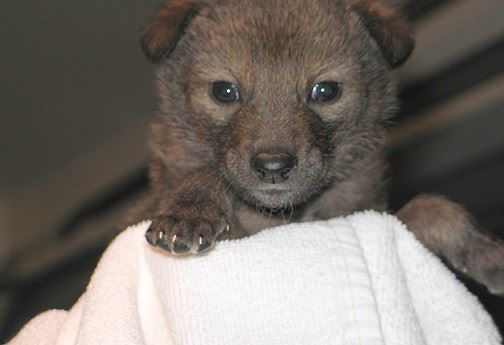 Coyotes are generally opportunistic, versatile carnivores with a 90% mammalian diet. The mammal menu depends on the season. Favorite foods include small mammals like voles, mice, rabbits, chipmunks, squirrels and groundhogs. Coyotes also target ground nesting birds and have a generalist diet of berries, grapes, persimmons, fish, snakes, grasshoppers, and an occasional deer. They will steal food from a successful predator or your pet’s bowl if left outdoors. Coyote consume carrion too, often distracting the original predator to steal the carcass. The interaction between coyotes and red foxes varies in nature. Most studies report that coyotes usually initiate the aggressive encounter while foxes locate their territories outside of established coyote territories.

Pet predation results from people either intentionally or inadvertently providing coyotes or their prey with food. During the winter months, food is naturally scarce so coyotes become bolder with human food sources. Late spring through summer, coyote parents hunt hard to feed their families. Cats do not survive coyote attacks, while smaller dogs may not fair much better. Larger dogs may fend off a coyote attack, but often have wounds that require medical care. To prevent negative encounters, reduce the availability of food sources by keeping your pets and their food indoors, cleaning outdoor grills, and securing garbage containers.

In the parks, keep pets on a leash and report lost pups and injured coyotes to park staff. At home, keep pets and their food inside. In the community, report coyote incidents to the PA Game Commission and/ or a local wildlife rehabilitator such as Diamond Rock Wildlife Rehabilitation Clinic.

The best chance to see a coyote in Chester County parks depends on many factors. Coyotes tend to be nocturnal in their activities, so when the park opens or right before sunset is often best. From late summer until early spring, most sightings are the result of young coyotes going out on their own -- the inexperience of youth! For documentation purposes, please report any coyote sightings to the park office immediately. 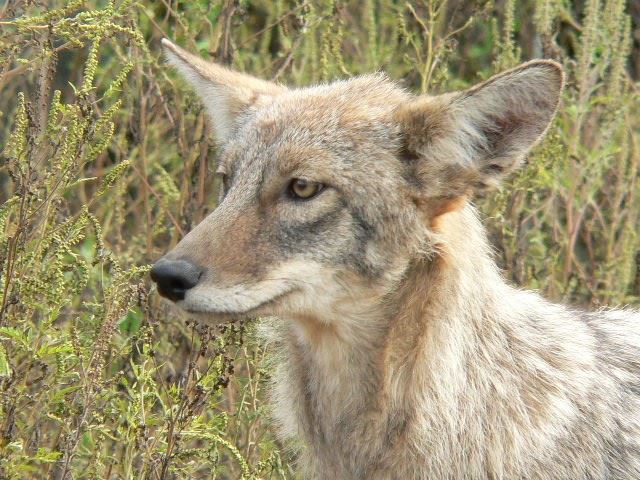