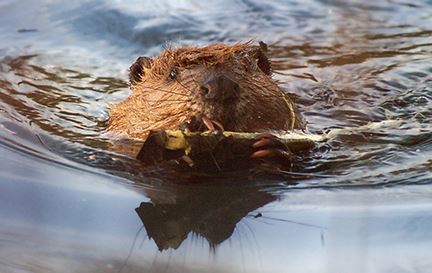 The North American Beaver (Castor canadensis), found in the family Castoridae, is one of two still surviving species in the world. The beaver belongs to the order Rodentia and is North America’s largest rodent.

The beaver is native to North America and Canada. In the 17th century, beaver populations exceeded 60 million. When the first European settlers arrived, the fur trade quickly became an important economic driver. By 1834, the beaver had almost been completely destroyed in North America. Changes in European fashion helped to ease pressure on the beaver, but it was a long way from being safe. In 1903, the State Legislature passed a law protecting the beaver. Today, the beaver population is estimated to be 10 to 15 million.

Beavers can grow to be to 40" long (including the tail), and weigh up to 60 lbs. The beaver has webbed hind feet and a large, flat, nearly hairless tail. It has dark brown fur on its back and sides with lighter brown fur on its chest and belly. Beavers have long, sharp upper and lower incisor teeth that they use to cut into trees and woody vegetation. These teeth grow throughout the beaver’s life. There are no obvious visual differences between male and female beavers.

With the exception of Florida, the beaver is found throughout most of North America, the southwestern deserts and arctic tundra. Beavers select rivers, streams, ponds and lakes upon which to build their trademark dams and lodges. They select a habitat with a good supply of trees to provide both adequate building materials and a source of fall and winter food.

Beavers live in family groups called colonies. Around the age of three, beavers begin to look for a mate and breed during the winter months from January -March. Beavers mate for life, but if one mate dies, the other will search again for a new mate. Each beaver lodge houses one colony that is comprised of the adult mating pair, 2-3 yearlings born in the previous year, and 2-3 kits born in the current year. Beavers have a lifespan of approximately 10-15 years in the wild, and 20 years in captivity.

Beavers are active primarily at night. The adult female beaver normally takes the dominant role within a colony. Beavers are very territorial and will protect their lodges from other beavers. They mark their territory by building piles of mud and marking it with scent. 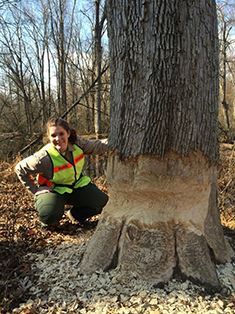