Park Ranger, Rachel Bishop describes the rescue of a Bald Eagle at Nottingham park back in December of 2012:

In the late morning of Sunday, December 2, 2012, a visitor entered the Park office to report a downed bald eagle. I quickly grabbed some supplies and headed out to the reported location where I spotted an adult male. Since eagles often feed on roadkill, seeing one standing in a field next to Park Road didn’t seem unusual, but his right wing was sagging, indicating an injury. He saw me and must have sensed what was about to happen. As I was formulating a plan for capture, he took off at a dead run towards Black Run Creek, and even managed to fly low for a short span.

I followed him through a swampy area of tall grasses before he made a landing on the far side of the creek. I jumped across, but he was smart and flapped back to the other side. Giving up trying to stay dry, I waded back across the creek. He made a stand at the edge of Black Run, facing me to raise the feathers on his head and neck, and flare out his wings as best he could. Moving in, I threw a bed sheet over him, which he promptly grabbed with his talons. To keep myself safe, I quickly got hold of his legs and head, and carried him out of the creek and back through the marsh. (Please do not attempt this yourself; I have had training and years of experience in handling eagles and other raptors.) 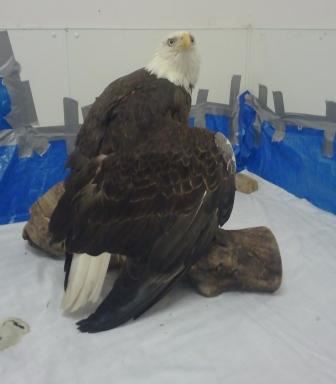 After loading him into a box in the back of my ranger patrol truck, I stopped so the visitors who reported him could get a firsthand look at the parts sticking out from under the sheet - the tip of his curved beak, a couple of talons, and the tip of that droopy right wing. Within an hour of discovering the downed eagle, we were at Tri-State Bird Rescue in Newark, Delaware where we learned he weighed a whopping 8.5 lbs. Due to the puncture wounds in his right wing and breast muscle, rescue staff determined that he had been in a fight with another eagle. Thankfully, no bones were broken, and with medication, time, and all the fish and rats he could eat, he was soon feeling strong and able to fly again.

On January 8, 2013, after a five week stay at the center and sporting a new metal identification band on his leg, this majestic bald eagle was released at Nottingham Park to again soar free over the parklands.