More information about the status of the trail in other counties is available from the Schuylkill River Heritage Area website.

On October 25, 2011, the Chester County Commissioners visited Spring City Borough to announce the new infrastructure improvements to assist the Borough, and to further regional trail efforts. At a press conference at Riversedge Shopping Center, the Commissioners officially dedicated the first phase of the Schuylkill River Trail in the County. The County completed 5.6 miles of the regional trail, which will ultimately run from Pottsville in Schuylkill County to the Delaware River in Philadelphia.

Chester County’s portion includes the Cromby trailhead, located on Township Line Road in East Pikeland Township, northward to Parkerford, south of Linfield Road in East Coventry Township. Cost of the first-phase trail construction was $1.9 million, and the County received $406,000 from PA Department of Conservation and Natural Resources to complete what the Commonwealth considers to be an important segment of the trail.

The Commissioners were also awarded $594,000 in Phase IV Streetscape improvements for Spring City, as part of the County’s Community Revitalization Program. Funds will pay for new curbs and sidewalks, street trees and lights, traffic islands, traffic signal posts and new signs. These improvements help to complete the Borough’s 2003 Revitalization Plan for the central business district of Bridge and Main Streets. The County’s first phase of funding began in 2003. With this round, Spring City has received a cumulative total of $3.2 million under the County’s CRP.

On April 2, 2013, the Chester County Phase I section opened to public use from the Cromby trailhead northward to Linfield Road at Parkerford. This section is approximately 5.7 miles in length and is fully ADA accessible. 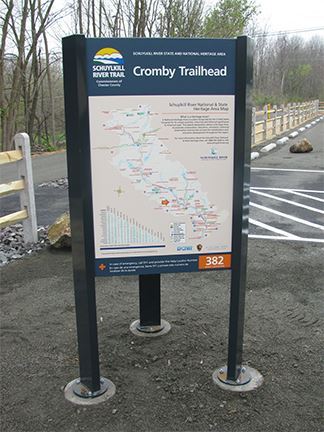