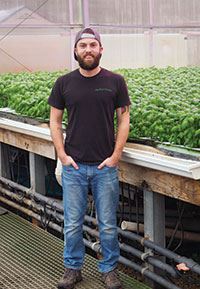 “Last year was our best year yet,” recalls Rick Constantine, managing partner at Herban Farms LLC, a hydroponic basil growing operation on the grounds of Cheyney University located outside of West Chester. With a nearly 13 percent increase in sales over the prior year and possible expansion in the future, Constantine has a lot to celebrate, but the path to success was not always a straight forward one for this family farm.

Herban Farms LLC was originally the brainchild of Constantine’s stepfather, Michael Derro, who started his career as a youth stocking produce in a grocery store. Fascinated by the industry, he pursued a career in it which eventually led him to working for an indoor grower who specialized in growing herbs in greenhouses, both in soil and hydroponically.

Hydroponic farming, a method of growing plants in a nutrient water solution instead of soil, can increase plant productivity since plants can grow year-round in specialized greenhouses without being subject to variable weather conditions.

After leaving to start his own farm, Derro had a fateful meeting with Dr. Steven Hughes, the director of aquaculture at Cheyney University. Both were competing to purchase a plot of land from the city of Philadelphia to start hydroponic farms. Although the city ultimately decided not to sell, this chance meeting led to Hughes suggesting Derro lease land from the university instead.

“We wouldn’t be where we are today without Dr. Hughes,” says Constantine.

Derro passed away in 2013, eight years after building Herban Farms from the ground up leaving his family to take over the reins much sooner than expected. “We learned how to do things on the fly,” says Constantine. “None of us have formal training in this. Several years ago, it was next to impossible to find information on hydroponic farming at our scale.”

Reflecting on his journey from a college student pursuing an education degree to full-time agriculture professional, Constantine says, “It’s still a little weird for me to consider myself a farmer but that’s absolutely what I do here.”

Although the family was able to navigate the challenges of running the farm and growing their client base to include Acme, Giant and Wegmans grocery stores all over the region, Derro’s son Justin, who co-manages the business with his stepbrother, cautions that hydroponic farming is not for the faint of heart: “This is not the kind of business you can walk away from. We are hands-on all the time.”

Constantine credits their success to many factors including the “Eat Local” movement that was gaining mainstream popularity when their farm was just starting. “Our customer focus groups have indicated that ‘local’ is what they care most about. It’s only trending up.”

By focusing their customer base on grocery stores in a 50-mile radius, the brothers and their sales team are able to develop close relationships with grocery store buyers. “We can shake their hands and they can ask us any questions they may have about the basil and how we grow it,” says Constantine. “Basil is a fragile product. Our ability to get the fresh basil from our greenhouse to the store shelves in 18 hours or less gives us a competitive advantage.”

Herban Farms has also benefitted from nurturing relationships within the local farming community. In order for their basil to be sold at Wegmans, they needed to get Good Agricultural Practices (GAP) certification. This certification verifies that fruits and vegetables are produced, packed, handled and stored as safely as possible to minimize risks of food safety hazards to the public.

“When the farm first opened, the state was still figuring out how to certify operations like ours so we worked with growers in the mushroom industry in Kennett who already had indoor growing standards in place to develop new guidelines that are in use currently,” says Constantine.

The Herban Farms team, which also includes cousin Andrew German and Constantine’s mother Carrie, has also invested time and dollars into their farm’s infrastructure. Installing LED lights and automating several of the greenhouse functions has cut down significantly on their energy bills and increased basil production, especially in darker winter months when there is less available light from the sun.

Surveying the trays of swaying basil in the greenhouse, Constantine is optimistic about the future of his family’s business and the indoor growing industry: “You can put one of these farms nearly everywhere. It’s not easy and it’s not for everyone, but indoor growing means that local food can be a possibility in even the densest urban landscape. We are always going to need in-ground farmers, but this technology opens up so many possibilities.” 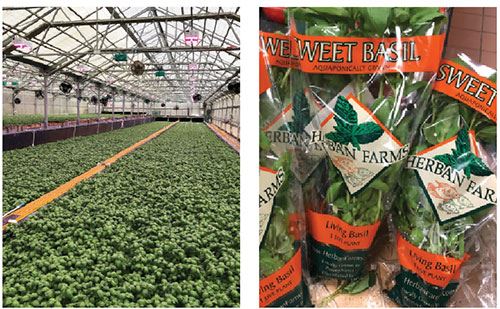