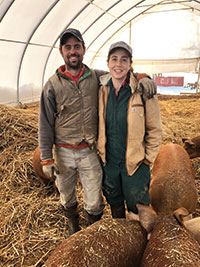 Pasture Song Farm started in 2014 with six heritage breed pigs in Jeremy Dunphy’s parent’s Phoenixville backyard. Two years later, Jeremy and his partner Clara Osborne were ready to expand their business to a 50-acre leased plot at nearby Lundale Farm, a move which has allowed them to diversify and strengthen their business model while fully embracing their sustainable farming ethos.

In addition to increasing their passel of pigs to about 100 per year, adding a small flock of broiler chickens and a cut flower business, the extra acreage at Lundale also allows Jeremy and Clara to grow the vast majority of their animal feed and bedding.

“It is important for our farm to be an ecologically closed loop so we can steward the land all the way through the hog to pasture cycle, “says Clara. It also makes sense from a fiscal perspective since input costs for feed and bedding can be a big challenge for farmers, especially in colder months.

Although raising pigs on pasture is not a common sight in Chester County, doing so is not a modern invention: “People have been raising livestock this way for centuries. We do pigs, then clover and then corn. The pigs fertilize the land and trample the forage. By growing row crops afterwards, we can renovate the fields and make use of the nutrients the pigs have contributed to the soil,” says Clara. 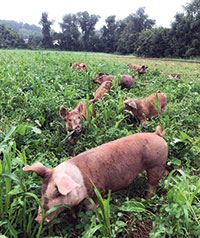 Pasture Song’s growing methods have a direct impact on the quality of their final products. “Our customers say our pork has a lot of flavor,” says Clara. “A diverse diet is what helps give the meat flavor and exercise gives it more muscling and firmness. Our pigs don’t gain weight as fast as conventionally raised pigs but the difference is in the taste.”

Although raising pastured pork takes time and patience, the Pasture Song duo is anything but slow moving when it comes to marketing and selling their meats. They employ a diverse array of sales channels including attending weekly farmers’ markets in Downingtown and Media, on-farm sales by appointment, selling whole pigs to restaurants and operating a CSA (community supported agriculture) program that features their pork, chicken, as well as organically raised beef from Seven Stars Farm where they also sell their meat direct to the public in their retail store.

With a strong social media presence and occasional on-farm events, Clara and Jeremy are excited to communicate their farming values and practices to a growing customer base eager for pasture-raised meats. 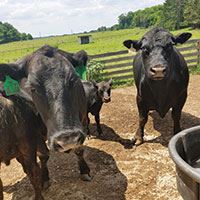 “In our travels through Europe, we saw how villages have traditionally embraced agriculture with the farm being the center of the community. Farms don’t need to be hidden, it’s a great opportunity for our neighbors to learn about farming and how we raise our animals,” says Kathy.

The Goins’ farm is an important part of their community’s landscape, as it is situated amongst several housing developments and abuts the 11th hole of the Chisel Creek Golf Club.

“We deliberately chose to farm between communities,” says Kathy. “We could have bought more acreage further out but it was important for us to be near our customers and our family.”

Like Pasture Song, the Goins have opted to connect with their customers through a wide variety of channels. 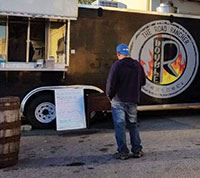 Their food truck “The Road Rancher” has been a critical part of the business in several ways. Not only does it allow them to sell ground beef at a premium price point, but it also provides Matt, the “foodie” of the couple, the chance to show off his skills as a former competitor in blue ribbon meat smoking contests. He and their food truck staff also enjoy the chance to talk to customers about how Katt & Mathy Farms beef is raised.

In addition to the food truck, the New Garden Grower’s Market and live animal sales to a nearby beef operation, the Goins also sell beef at customer request from their on-farm store. “We are better than Amazon,” says Kathy. Customers are able to purchase everything from one pound of ground beef to an entire steak package with a phone call.

As if all of that didn’t keep them busy enough, the Goins are expanding their business to include welcoming the public onto their farm. They host corporate events and farm-to-table dinners with neighboring 1723 Vineyards, a new vineyard and tasting room with a similar vision for the economic and social opportunities suburban agriculture can offer. They also have plans to open an Airbnb rental property where visitors can see the steers grazing from their bedroom window.

Like the Pasture Song duo, Kathy and Matt are excited to be a part of the future of farming in the county: “We think of ourselves as 21st Century farmers. There doesn’t need to be a sharp divide between the city and the country. Our neighbors have the opportunity to see how their food is raised and it encourages us to be transparent in everything we do here on the farm.”