Too Much of a Good Thing

April showers bring May flowers, but the deluge of rain last year presented an unprecedented level of challenge for farmers across the region. According to the National Weather Service, the state had nearly 64 inches of rain in 2018, 50 percent more than normal.

Jeff Stoltzfus, a Penn State Extension educator as well as co-owner of Glen Run Valley View Farm in Atglen, worked with many farmers who experienced severe crop loss due to plant diseases encouraged by the extra rainfall.

“Dry years are insect years and wet years are disease years,” Stoltzfus says. “It’s easier to control insects. You need to repeatedly spray plants to prevent disease, which is hard to do when it won’t stop raining.” 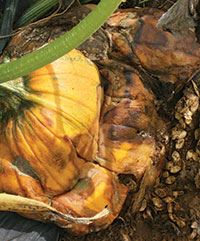 Stoltzfus’ own farm, where he and his family grow strawberries and pumpkins, was relatively fortunate compared to many he visited due to his sloped property which allows for better drainage.

“We picked a lot of strawberries in the rain, which isn’t the best because it can shorten the berries’ shelf life,” recalls Stoltzfus. They fared better with their pumpkins but he and his team cautioned customers to double check their purchases for any soft spots and advised them not to carve them too early, since soil-borne bacteria aided by wet conditions can lead to pumpkins going prematurely soft.

“After last season, I don’t care how hot or cold it is, I just don’t want any more rain or snow,” says Stoltzfus.

Stoltzfus’ Penn State colleague Dr. Kari Peter says the fruit growers she works with feel similarly: “I spoke with a grower who reported two-and-a-half inches of rain in forty minutes. He joked that he almost had to strap a kayak to his tractor to get around the farm.”

Even well-established farmers with whom Peter works say 2018 stands out as one they will never forget. The extreme weather conditions brought new challenges farmers hadn’t contended with previously. “With the climate shifting to wetter, warmer conditions, plant diseases from the southern part of the country are now heading our way,” says Peter, who has concerns about the upcoming growing season.

For those farmers who were able to hold diseases at bay enough to bring farm products to market, weather still took its toll. “The lack of sunlight meant that some fruit didn’t have the chance to color and sweeten like it normally would,” says Peter. “The extra water diluted the sweetness. When people ask me why their fruit wasn’t as sweet as it normally is, I told them to blame Mother Nature.” 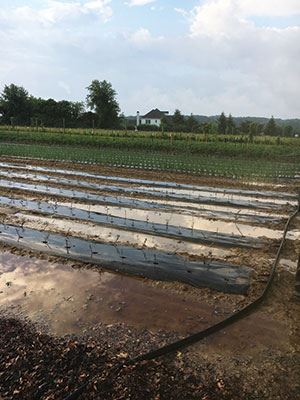 Ike Kershner of North Star Orchard in Cochranville takes a sanguine approach to the recent weather fluctuations: “Every year has different challenges not just from weather but from many other factors. We just cope as best we can and await the mythical perfect season. And to be fair, we have had some pretty good ones.”

Although he and his team dealt with some extra plant disease pressure and difficulty getting into the wet fields with their tractors, their farm fared well overall. Since they sell their fruits and vegetables directly to the public, Kershner, his wife Lisa and their farm employees were able to talk to customers face-to-face and through social media about how the growing season was going, preferring to focus on the positives.

Although one might think muddy fields or rain-stressed fruit trees might have been Kershner’s primary concern, he cites a different challenge: rallying customers to leave their houses in bad weather. What is his best advice on how to support your favorite farmers during a challenging time? “Don’t skip market just because it’s raining.”

This sentiment is echoed by Peter (and likely many growers across our region): “Customers need to appreciate the effort it takes for farmers to bring us fresh farm products in all kinds of weather conditions. If you think you are bothered by the rain, imagine how hard it is for farmers whose livelihoods are affected by it.”