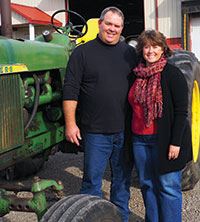 Farmers Gerald and Cindy Rohrer share a wave with nearly every passing car during one of the rare occasions this busy farming couple is able to relax together on their porch. Whether it’s a neighboring farmer or a member of their church, it is clear that the Rohrers are deeply rooted in their community, just as the hay they produce is an important part of the larger agricultural industry that powers the county.

Recently they made the decision to preserve their Cochranville farm becoming the 500th preserved farm in Chester County. In doing so, the Rohrers have ensured that their land will always be used for agricultural purposes.

“I grew up on this farm and believe that it is very important to keep it as a farm,” says Gerald. “The highest and best use of this land is for farming, with good soils that support the growth of crops.”

Gerald’s parents purchased the 153-acre property in 1966 and ran it primarily as a dairy operation. “I have a deep appreciation for how my father and his fathers before him farmed,” says Gerald, an agricultural history buff and member of Upper Oxford Township’s Historical Commission. A 9th generation farmer, Gerald has traced his ancestry back to German farmers who arrived in Pennsylvania in the 1700s. Cindy, a practicing nurse, grew up in Lancaster County where her family has farmed for 10 generations.

The photo below shows the Chester County Commissioners congratulating the Rohrers on the preservation of their farm.

When Gerald and Cindy took over the farm in 2001, they transitioned the operation into crop production because of the high demand for good quality hay across the region. Although hay may not be the most glamorous crop, it is arguably one of the most important because it makes many other farming operations possible. Hay is needed to feed equine, dairy and beef cows, smaller livestock like sheep and goats, and is also a key ingredient in mushroom compost. At the top of the hay quality hierarchy, equine owners often require the best quality hay, which also brings the highest prices for farmers.

By design, the Rohrer’s customers are primarily horse owners, from large racing operations and dressage stables to people owning a horse or two for leisure riding. The Rohrers also own and operate a small trucking company to transport their products to clients across the region and bring in additional hay varieties from New York, which allows them the flexibility to produce custom hay blends for customers and supplement their own harvest.

Although they grow a variety of grasses, the Rohrers focus on growing orchard grass because it is one of the more popular ingredients in horse feed and it grows well in our region’s temperate climate. Orchard grass does not thrive in warmer weather, so horse owners as far down as Florida purchase hay grown on their farm via a feed distributor they work with.

During the year Gerald works with an agronomist to measure the soil’s nutrients and strategically add fertilizers like lime to ensure the best possible crop yield. He reseeds his fields every 5-6 years and rotates plantings of field corn to balance the nutrient needs of the soil. On average, he cuts his fields four times in a season depending on the weather. “It’s all a matter of timing,” says Gerald.

Unexpected wet weather or long stretches of draught can stress the plants and make harvesting and storing hay difficult. Gerald can tell from the smell, feel of the stalks and the telltale pale green color that he got the timing just right.

During good stretches of weather, the Rohrer family and any seasonal staff work long hours to harvest, dry, bale and store the hay. Gerald proudly mentions that Cindy generated 6,000 bales driving a tractor and baler in the 2018 harvest. Now a young adult, their son Brock is taking a more active interest on the farm as well, helping the family meet growing demand.

Despite their busy schedules on and off the farm, the family believes in serving as agricultural ambassadors to encourage the non-farming public to appreciate how critical farming is to the economy and quality of life in Chester County. They regularly welcome visitors, especially younger generations, through hosting back-to-school socials and allowing sledding on their hills and ice skating on their pond.

“These children will be the ones making decisions about where development goes in our community someday,” says Cindy. “We want them to understand how we farm, why we do it and why it matters.” 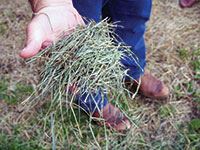 Do you know the difference between hay and straw?

Hay is usually a blend of dried plants and grasses and it contains a variety of nutrients useful for livestock feed. Straw is commonly the dried stalks of the wheat or barley plant after the seed has been removed. It is less expensive than hay, low in nutrients and often used as animal bedding and decorative purposes.