This index represents an attempt to document all African American soldiers and sailors from Chester County who served in the Civil War. Unlike their white counterparts, black volunteers did not muster into local companies. There were no black Pennsylvania regiments. Local volunteers from Chester County joined the United States Colored Troops (USCT) or other black state regiments such as the 54th Massachusetts.
(The database was too large for one report, see both reports for full information on a soldier)

Of those identified, Chester County African Americans served in over 30 different regiments. The largest contingent of Chester County soldiers (134) served in the 3rd USCT. This regiment was mustered in at Camp William Penn outside of Philadelphia in August of 1863. 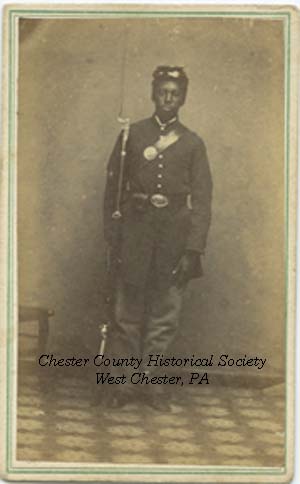 Did We Miss Your Ancestor?


If you know of a Chester County soldier who is not in this index please let us know. If we can verify his service and connection to Chester County we will add him to our index.


For a History of the USCT