In Chester County there were 13 unique causes for water impairments per the 2014 Integrated List. Chester County Water Resources Authority has developed a map series that shows the locations of streams listed as "impaired" by PADEP. The 2014 Integrated report was published as a final document
in December 2014 (link to report on the PADEP website).

Map IW-6-2014 - Mercury illustrates streams that were delisted in 2014. There are currently no streams listed for mercury as of 2014. 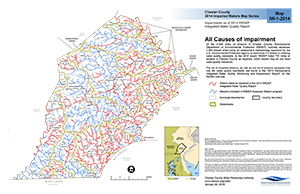